Battle Brothers (2017) is a turn based tactical RPG which has you leading a mercenary company in a gritty, low-power, medieval fantasy world. You decide where to go, whom to hire or to fight, what contracts to take and how to train and equip your men in a procedurally generated open world campaign. 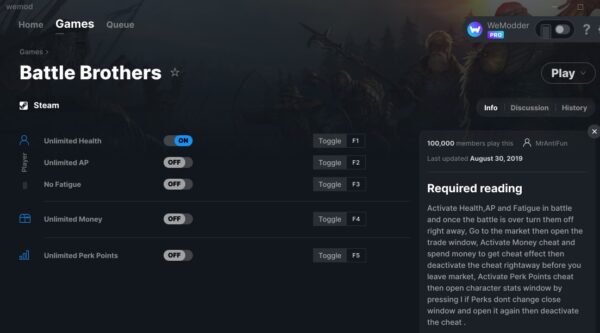 1. “Stats” – Activate the script on the inventory screen. In the drop-down list “>>>” select the type. Set “Act.” in the “Yes” position. Remove or put on any item of equipment (just like before). In the line “=” the value will appear, and “Act.” will switch to “No”. Then you can choose another type, set the “Act.” in the “Yes” position and repeat the action.
2. “Mix” – Activate the script on the screen where you will change the values. When you finish editing the values, deactivate the script. In order for the value of Perks to appear, you need to put on or take off equipment (as in “Stats”). All other values appear immediately when you hover the cursor on the subject. Works in inventory, in store, in battle (on the next turn after editing). Some values of the game does not save and resets after a restart, and some are saved only for the “named” equipment. Values marked “(ext.)” appear in the additional line “= (ext.)”. Values marked “(+ext.)” may appear in both lines.
3. “Teleport” – by pressing the button on the numeric keypad teleports the squad to any point in the center of the screenю
4. “Map” – opens the entire map and shows all objects, including moving ones.

Here you can find Battle Brothers Trainer for the latest game version (1.5.0.12 / Steam). Currently we have free cheats from MrAntiFun and AlexS.